CNN just reported on their Live show that a report released today says the Federal Reserve loaned $7.7 Trillion dollars to the big banks and Wall Street firms during 2008. Aren’t those the same bankers that said the whole reason the mess happened was because of citizens across America who got into a financial hole with their own finances? And then, those same bankers borrowed all that money from the Fed because they had to in order to stay afloat?

Aren’t they the same ones that didn’t want to lend anyone any money thereafter unless a complicated system of credentials and perfect credit were held by individuals, small businesses and homeowners?

The report is apparently on CNN and Bloomberg.com. It includes the amounts loaned to these large banks and Wall Street firms. Worth seeing.

You just have to read this – Absolutely unbelievable –

So, not only does it take an obscene amount of jumping through hoops for most Americans to get any money borrowed from these banks or the SBA or to prevent foreclosure or to get the small business loans offered through banks – or to get government help through any program available from foodstamps to WIC to TANF to help with not being homeless any longer, when it is the Wall Street financial products, bankers and their gambling debts that are in trouble, they are handed the keys to our Treasury and Federal Reserve and told to get what they need, however many billions of dollars it may be. Obviously, they couldn’t pay their original notes and creditors or they wouldn’t have even needed the money. Obviously – that would make them a group of companies with the worst credit scores, the worst at being overextended in their borrowing and gambling with it, and the very worst at what they are doing in order to have put themselves (and us) in this financial disaster in the first place.

Freely give them whatever amount of money they need and then print money to make the rest of us absorb their losses whether we agree to it or not. They are the worst violaters of good financial management known to the history of mankind (evidenced by the fact that it took $7.77 Trillion dollars plus $700 Billion in TARP funds and another $134 Billion for AIG and another 15 programs of interest free money systems plus the US taxpayers buying all their bad debt products in order to get them solvent.)

I’d hate to ask for $300 – they would just laugh while sitting on their pile of our money to the tune of hundreds of billions of dollars each of them have taken.

Even existing small businesses with good, even perfect repayment histories have been denied loans all over the United States in every state, county, district and city by these same banking institutions and their government backpocket “keepers”. I’m not sure which one is the worst – the banks that did it and their Wall Street counterparts, or the government players who facilitated it. Obviously, the only real enemy of the US today, exists in the concept of capitalism which denies the free market principles when it has to do with banking, financial products, Wall Street brokerages, financial institutions, financial investment firms, hedge funds, banks, insurance companies, credit default swaps and other toxic exotic fincancial vehicles, large corporate players in Wall Street and a handful of very wealthy players – but leaves everyone else in the nation strapped with not only suffering those personal failures in the free market capitalist system but covering the big players’ losses, as well.

To say it is unfair is the understatement of the century. To say the situation is untenable and unviable in this form will likely be closer to the truth of it. It’s just a matter of time.

What kind of democracy is that?

It occurs to me, having watched the insanity of Black Friday shopping attempts online, in person and for layaway – that retailers are not really interested in their consumers. It is a shame. The idea of lining up thousands of shoppers to offer a few deals with only a few units of the “deal” actually available seems to be so prevalent that it is obvious the retailers couldn’t care less about those coming to their stores. And, don’t even try to layaway something shown online during the Black Friday hours at the sale prices shown, because it can only be purchased for layaway if the local stores have it available that moment and after the swarm of crowds in person, the few goods offered are actually gone at the sale price. Therefore, the websites of major American retail stores won’t allow it to be purchased online or on layaway online at all – long before 10 am or noon or 3 pm on Black Friday actually arrives.

In fact, the Black Friday deal prices online, regardless of the store’s layaway policy – simply can’t be purchased even at 11 am the day of Black Friday because the websites won’t allow it. The stores that even offer layaway are very few, despite the current economic conditions as if all of America is having an economic reality like that of the store’s CEO and CFO and other decision makers. Oh well. Why should vast numbers of households be allowed to participate in Black Friday “deals” at all, or online “deals” or layaway options or sale prices – which is what these store’s behaviors and decisions reflect? Why not simply exclude 90% of American consumers from participating in Christmas and holiday shopping? The stores obviously don’t need those sales anyway and that is certainly the important thing in their estimation. Instead of making it possible for the greatest number of customers to participate and take advantage of the Black Friday sales and specials and deals – there appears to be a tendency to narrow that number as much as possible. So, why do it at all?

There must be an attitude among merchandisers and retailers that embraces bait and switch tactics – announce that all these deals are available and online, as well – then make it impossible to purchase any of their sales items using any reasonable policy. And, there must be a decision process among retailers that sees the customer as both the enemy and the hoped for adversary in a sales transaction rather than as a team mate in the sales process where goods are delivered and satisfaction is guaranteed. Why would it be that way when stores are crying for customers and telling news shows that the retail industry is seeking higher revenues? Where do they expect to get those in an adversarial role with their consumers? How can that possibly work in any positive manner?

Would the manufacturers whose brands are being affected negatively by this nonsense actually be pleased in any way by it? Of course not. Sony, Toshiba, GE, Sharp, Samsung and other major players would be offended to know that this is why their brands sold so few units in comparison to their desired levels of sales. They wouldn’t want these kinds of games to be run on the consumers of their products through the American retailers, distributors and outlets for their goods. In fact, it would piss them off as much or more than it pisses off the consumers who are trying in good faith to purchase these products. Why do retailers even have the right to do this? Is it because the laws simply don’t prevent it or is it, in their estimation – “good business practices” for the 21st Century and their online brand presence? I won’t ever buy from any of those retailers who I’ve watched this year jerking my relatives and friends and communities around this way. When a purchase decision is made anywhere around me, I won’t encourage people to participate in any way with any of these stores and I will definitely tell the anecdotes from this year that I have witnessed both for online purchases with them, layaway attempts with them and for in-person attempts to purchase with them. And, at those moments – I will most certainly call the stores by name to get anyone I know to simply spend their money elsewhere.

Maybe those losses in sales won’t affect those retailers and probably they don’t need them anywhere I might happen to be, but then – who knows, it might be just those sales decisions by a multitude of Americans which mean their shareholders don’t get paid. It would serve them right.

Recently, I was in Landrum, SC and thrilled to see a sign at the First Baptist Church of Landrum announcing a Free Thanksgiving Feast for all those who would choose to join them.

Among the photos of the church, I managed to get one of the sign and it really started me thinking about Thanksgiving, what it means and what it could be. In America today, we all go off to our own little family groups, eat too much, spend too much doing it, sit around and watch ball games while nibbling on the leftovers with the rest of our family members we can stand. 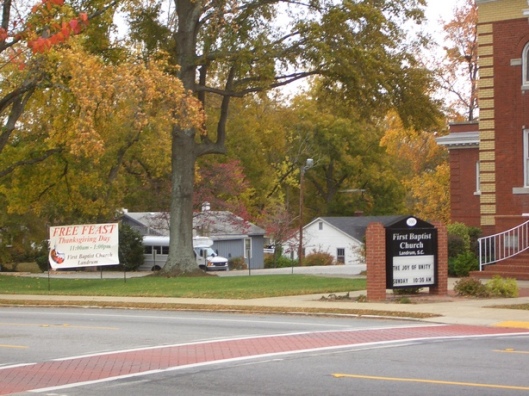 But, when I saw that sign in Landrum, it reminded me that Thanksgiving when it was first celebrated, was a community feast with the coming together of many disparate neighbors to share their harvest and culture with one another in gratitude and welcome. There would have to be a kindness in that which is not the usual, everyday kind. As much as these first colonists and their native American neighbors were not enemies, neither were they anywhere close to the same in anything except humanity and an honor of some greater power than themselves. There is a humbleness in that which is almost noble in its equality with hands to hands across a great table of feasting and comraderie. That is amazing.

And, today – at least in Landrum, SC where the members of the First Baptist Church thought to invite their neighbors, maybe the same essence exists. Sometimes all it takes is to extend a hand – beyond one’s family, beyond one’s own doors and beyond one’s own ideas of what Thanksgiving and these particular holidays mean.

A nice picture of the church –

Nighttime Sunrise self portrait photograph by Eiese Jorge. This is a photograph by an awesome new dramatic sequence photographer. She needs votes on your facebook or twitter for talenthouse to honor her talent.

This photographer has captured a dramatic moment in time. She has a sense of style that in rarely natural in occurrence. I would love to see her have all of our encouragement to keep going with her talent. I really feel that this is a profession that truly needs her talent. I haven’t found many other places to see her work YET! But I do really look forward to it! Please vote for her. She needs all of your votes!! Thanks!

Her photography, especially in this piece, reminds me of Vermeer and Van Eyck brothers from Holland. She is really amazing and I want to see lots more from her in the future.

The page to vote for this photographer is: